Unless you’ve been living under some kind of Salesforce-repellent-rock you’ll be aware that the inaugural London’s Calling event took place on the 5th Feb. But if you were under that rock then I’ll quickly mention that it was Europe’s largest Salesforce Community event to date.

When I first heard of the event, at the monthly London Salesforce Developers meetup, I was very excited, and pitched to the MobileCaddy team that we should submit a talk idea… so to say I was honoured to have our MobileCaddy CFP response accepted was (is) of course an understatement. There were 70 CFPs received by the organising team (more on that motley crew later) and there ended up being 28, plus two keynotes.

Only the Paranoid Mobile Apps Survive

This was to be my first speaker slot at a Salesforce event… I’d done a couple at the Ionic UK Meetup group before but they’re not on quite the same scale. My talk was entitled Only the Paranoid Mobile Apps Survive and focused on some key stumbling-blocks and factors that needed to be taken into consideration when wanting to take a critical business app mobile. Although our MobileCaddy SDK greatly helps in supporting the app designer and developer in these areas I was keen for my talk to steer clear of becoming a sales pitch. Having spoken to Simon following the acceptance of the talk into the program he mentioned that this angle was one that led them to choosing it for inclusion. Simon and co have been extraordinarily efficient since the event too. And in speaking of them, the fabulous organisers were;

In the lead up to the event Simon made sure I had a clear timetable for submission of various steps of the talk, and I don’t know if this is the norm, but it certainly helped me avoid a “last minute rush job”.

Right, time to start work on the real slides for #LondonsCalling.
Better pour myself another moonshine then to grab me some animated gifs

On the day I arrived early since MobileCaddy were also gold sponsors of the event and we had a booth to set up. I’ve no idea what time Jodi and the gang had gotten there but things were already in full flow… and the first sight of the T-shirts was really exciting… it was all very real.

I had planned to get to as many talks as I could, but the flow of attendees coming over to our stand was really quite astounding, and I made it to far fewer than I had hoped. It was a genuine pleasure though to experience a real informal, community atmosphere and to have so many chats with folk who were really interested in Salesforce and intrigued to learn more about how we’ve enabled true offline mobile Salesforce apps; the entire sponsors area had a real buzz, and feedback from the other sponsors seemed to mirror mine.

Over lunch (which was top notch, by the way) I met a fellow speaker, David Biden who was also due give his talk in one of the afternoon slots. It was almost uncanny how similar his situation was to mine; a first time talker who had planned an anecdotal style talk who was eager to avoid pimping his own company. We shared thoughts on how tough 15-20 minute talks were to plan, trying to make sure there was enough depth without getting in so deep you run out of time. His presentation covered Salesforce in the Public Sector and is definitely worth 17 minutes of your time… so go watch the video once you’re done here.

Whilst setting up for my talk the event tech-chap in my room was baffled that my laptop hooked up to the projector without issue; well that’s Ubuntu for you 😉

The talk went well, I think. Though there were a few spare seats, but in all honesty I wasn’t surprised… the three other talks on at the same time were being run by seasoned pros, and talks that I definitely would have wanted to attend. Of course I’d love any feedback so please feel free to have a gander and let me know your thoughts. 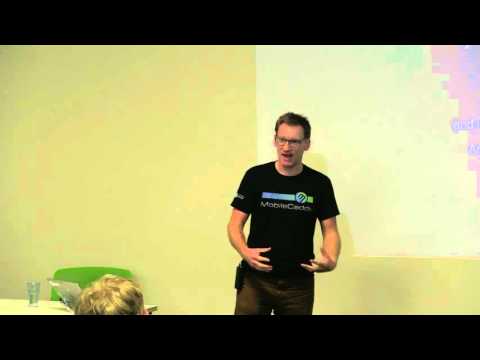 There’s no way I can’t write an article on the event without mentioning Peter Coffee’s closing keynote… full of food for thought and delivered in the coolest of fashion. Again, check out the vid and enjoy.

And following that was fun and frocking at the after-party, again the community spirit was in full flow and another chance for myself and the rest of the MobileCaddy team to mingle and chat… and by the time I left I have to be honest I was a little tipsy and very tired.

In wrapping up I can only say that I’m already looking forward to next year’s London’s Calling, and of course any of the other European events that were much talked about during the day. The organisers did a grand job of supporting me, and the rest of the community made me feel very welcome.