Last week was a busy one with regards to meet-ups, and it was capped off with a super-whammy gathering of the Ionic UK folk. The theme was to be the ever-progressing suite of tools that make lives for those building with Ionic even easier. As well as attending I was also contacted by one of the organisers – the lovely Sani Yusuf – to see if MobileCaddy wanted to demo our apps and tools. Having been actively improving our tooling recently (see Introducing MobileCaddy CLI 1.0.0) I jumped at the opportunity.

The friendly Makers Academy folk hosted us and the mobile insights tool Count.ly sponsored the beers and pizza, so thanks go to them for getting behind the event.

Before the event kicked off I was chatting to a couple of the most recent graduates from the Maker’s Academy, and they were telling me how they’d built their final projects using Ionic. One was (as I’d describe it) “An Uber for Errands” and the other was an eco-check-in-reward type service, where users could check-in to locations (coffee shops, retail outlets etc) and the place of check-in would donate a small sum to help towards planting trees. I wonder if we’ll ever see either of these come to fruition, I hope so.

But hey, enough of my yakkin’; whaddaya say? Let’s boogie!

With MobileCaddy the Salesforce administrator can decide who get’s which version of the app (for example a set of test users can beta test a new release), and along similar lines Ionic IO allows you to deploy to “channels”, that might represent beta testers, for example.

A closing remark from Asim was that it should be noted that in his experience Ionic IO’s Deploy is still very much an alpha product… but great potential for things to come.

As well as the Ionic IO tools there are many 3rd party apps and services that can be used to enhance your Ionic App. Sani gave us a rundown of some of his favourites;

We haven’t really used many 3rd party services at MobileCaddy as most of these functions are built-in, either through our APIs or the sheer fact that we have a Salesforce.com backend. I can see for sure though that having a toolset like Firebase and Count.ly would give you an incredibly cheap and easy leg up to building amazing apps.

Next up was an open-floor session. I opened with a quick talk through our MobileCaddy tooling setup. I covered how we match the Ionic IO toolset for mobile apps built with Salesforce (with offline in mind). One thing that struck me when I was writing the talk up was just how similar the architecture for an app built and run with Ionic and Ionic IO would now, compared with how we’ve been doing things at MobileCaddy.

A recording of my talk is here; 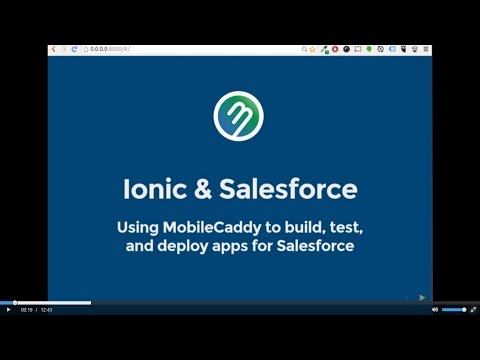 We then had several groups of indie devs and users come up a share their apps… I LOVED this bit.

Jambusters – A real time traffic monitoring app built for Londoners. With the app you can set routes and times so that you only see the information relevant to you. The app allows you to see live traffic cam statuses and pictures. The chap that built was an old-skool dev, building the backend with Perl, Emacs and sqlite. I can’t find a link to the app unfortunately… but I’m on the hunt for it. The developer is after some cash and users to test it.

HooHair – billed as “the easy way to book your haircut” it’s a stylish location based app to allow online booking of haircuts. The app looks pretty neat, yet still in development. The developers recommended that anyone looking to work with maps in the apps to take a look at MapBox as it has great customisations available.

Sold House Prices – This is a free app that lists the prices that houses were sold at, based on location. The app itself was really only a tool to demonstrate a Google Analytics cordova plugin that can connect to the native Google Universal Analytics SDK. The demo was pretty neat… and showed how users (us in the audience trying out the app) had our interactions recorded. These included search criteria etc, and was pretty cool.

This was a great meet-up, full of smashing talks and buckets of information. Thanks go to Sani and Ryan for organising and to the sponsors and all the presenters and those willing to share their work in the showcase section. Of course thanks should be extended to everyone involved in Angular and Ionic too… and I hope they already know how much I love them all.

The next meet-up is planned to coincide with Angular Connect… and I’ve been hearing that we might be in for a surprise. I personally can’t wait (especially as I lost everyone on the way out so missed out on post-meetup-beers).